What is a Variable Moment Driver/Extractor and How Does it Work?

It is a vibratory driver/extractor that has no amplitude, or moment (energy), when the hammer is started and stopped.
1) This is accomplished with the use of two sets of eccentrics, one set apposing the other set during start up and shut down.
2) These eccentrics are then, phased in and out of time with each other during operation creating amplitude or moment (energy). This infinite amplitude control is given to the operator for minimizing the radial vibration in the surrounding native soil and maximizing the drivability of the pile while limiting the impact on nearby structures. In addition the suppressor produces virtually no crane line vibration common with a standard driver/extractor, known as resonant vibration. Added to this feature is higher frequency (Hz), or vibrations per minute, which further lowers the size of soil vibration.

This graph shows the comparison of particle velocities for three driver/extractor types. Standard with a vibration speed of 1,600 VPM, high frequency operates at 2,100 VPM as does variable 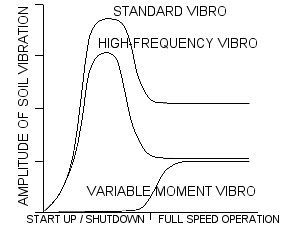 What is Resonant Vibration?

In order to understand resonant vibration, some basic terms used in describing the interaction of vibration in soil and structure need to be outlined.

Particle velocity is a name given to the measurement of amplitude size over time created by the vibration speed. (Represented in the driver/extractor comparison graph above) This mathematically described as inches per second (in/sec).

Seismic metering devices are commonly placed on structures around jobsites to monitor the PPV over the day’s work to protect against potential damage claims. High frequency and variable moment driver/extractors are used when the potential for structural damage is elevated.